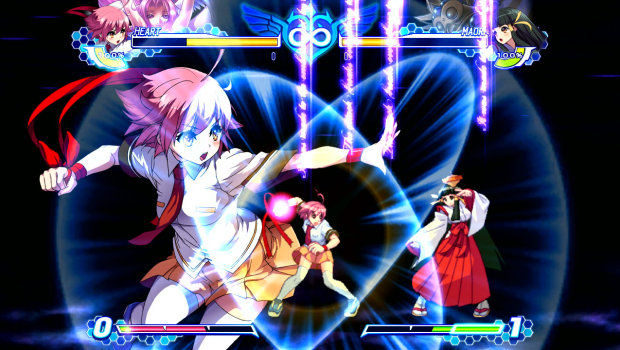 Some sad news has been coming directly from the publisher Aksys which has to do with cross region play on the Japanese version of AH3LM.

Unfortunately, we were told that there are no plans at this time to implement cross-region netplay. #sadheart

Because many players imported the game back in May of this year the chances of netplay being abundant on the North American version may be slim.  Because of this new information, FGO will be adding the import game to the imports section as an alternative with a separate page.

*Previous Post*
The update to Arcana Heart 3 titled Love Max!!!!! is available on PS3 and Vita through the PSN digital store and various retailers. This new addition brings balance changes to the returning cast and adds some extra modes for fans of the previous title to enjoy.

For those of you who are new to the fighting game I’ve embeded some match play from yes06kin.

We will be updating our twitter with any information about live streams so follow us and stayed tuned.

We’ve officially added a AH3LM page to the PS3 section under Consoles where more information will become available in the future.