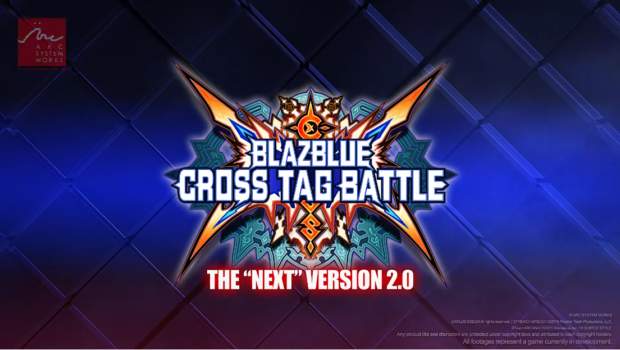 Update 2:59pm 08/04/2019-  Toshimichi Mori, producer of BlazBlue, got on stage after EVO’s top 8 for BlazBlue Cross Tag Battle to unveil the new trailer. We have updated our post with the official trailer below!

It would seem another leak has ruined an incoming reveal this one being from Arc System Works for BlazBlue Cross Tag Battle:

Most likely planned for a reveal during the finale of top 8 at EVO, the new trailer unveils BlazBlue Cross Tag Battle 2.0 an update that will be adding more characters to an already pretty packed roster.

The trailer finally reveals the universe teased in the previous one which has long been speculated as Senran Kagura Estival Versus as we see Yumi being showcased as the next guest character.

To our surprise things were not done as another universe would be revealed to be none other than Akatsuki Blitzkampf! Of course, Akatsuki the main protagonist from the series has been a guest character on Under Night In-Birth as well so this comes as no surprise, however, the Blitztank is a much different case entirely.

Lastly, a final character from the RWBY universe was revealed to be Neo Politan ultimately confirming what there will be 9 new characters arriving to the update that will take place in November of this year!!

Will be updating the page with the official trailer as soon as one becomes available. We are certainly excited to see who will make the cut for the last 6 positions and look forward to each new reveal!!

BlazBlue Cross Tag Battle is available now available on Switch, PlayStation 4, and PC via Steam the latter of which still has a free trial that will be ending today so don’t delay if you would like to try out the game.