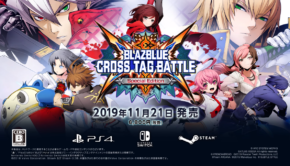 Arc System Works recently released a trailer announcing a special edition for BlazBlue Cross Tag Battle: Though the trailer is