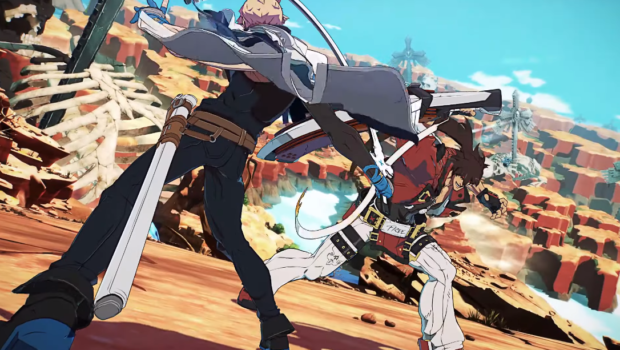 A new trailer was not the only thing revealed during last nights Arc System Works live stream. The upcoming demo, which will be playable at Arc Revo next week, was revealed during the broadcast giving us details on new game mechanics and features. For the most part, Guilty Gear’s controls remain the same with some very minute changes. Dash can now be done with one button. We suspect this will make things a touch easier for air dashing but would have to really get hands on to confirm this. Roman cancels are also tethered to just one button but can still be activated the original way. Arc System Works has definitely made some very big changes to the game system. The basic dust attack no longer attacks as a follow up. While the overhead property and crouching knock down attack still remains, a counter is now the only way to create big damage.

The gatling combo system has also gone through a bit of a change as well. Players will now only be able to cancel Slash(S) into Heavy Slash(HS). Punch and Kick attacks can only be canceled into command normals that are tied to their respective buttons.

ASW seems to be balancing this out with adding more damage from attacks overall but the ultimate aim from this change seems to be targeted toward helping new comers get accustomed to the combo system.

A new instant guard mechanic, also know as just defend in other fighting games, will award players with meter. Roman cancels have also made their return though it would seem they will act a little differently based on how you use them. One of the biggest changes comes with getting put into the corner. A damaging combo in this area of the stage now creates imaginative wear and tear based on the amount of damage you inflict on the opponent resulting in a glass shattering effect and an instant stage transition that resets the game back into a neutral position.

This certainly changes the dynamic of game play as corner pressure is often a huge part of offense and we are interested to see where this takes the series especially on a competitive level.

You may have also noticed the special icon shown in the picture hiding Sol-Bad Guy’s face. This new mechanic in particular seems to add status effects based on a characters attack and can be found near the players burst gauge when activated.

Beyond the dust mechanic counters also play more of a special role in Guilty Gear this time around as we saw a special counter attack that would slow down time and allow for follow up attacks once activated. Arc System Works has definitely upped the ante on their latest offering in more ways than one. As you may have noticed in the picture above, move lists now show what each attack does in real time as players will see a full clip of an attack taking the guess work out of how each move operates. Setting controls, and selecting characters also have received some additional add-on giving players access to more information about who they pick and what makes them unique among the cast. At the end of matches, players get a special report card grading them on four major areas of their game play. This feature in particular looks to give players a clear understanding of what to work on which should be very helpful in encouraging players to adjust and adapt to an opponents gameplay.

We know from a live Q&A that the first playable demo at Arc Revo next week will be a deciding factor in how Arc System Works moves forward in development.  A closed beta of the demo is also going to take place around Spring of next year.

This will most likely give us an answer to one of the more pressing questions of yesterday’s stream, the netcode. For now, Arc System Works is very tight lipped on what netcode they will use. Many have been demanding the use of roll back netcode something Arc System Works has yet to add in their online fighting games sticking to an input delay style of netplay.

We are certainly hoping that more reveals are on their way next week so be sure to check back with us as we will indeed be covering any news that comes out of this special event!!

Axl Low Returns To Guilty Gear 2020 In The Latest Trailer!! →