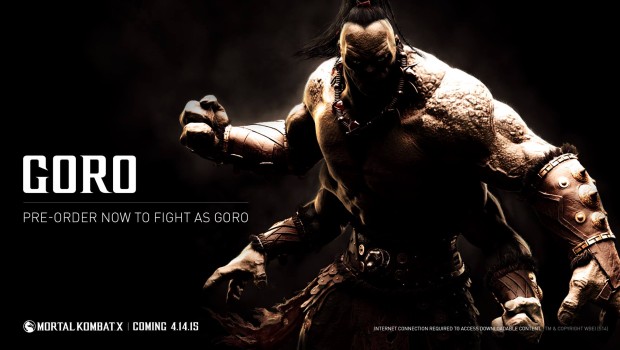 Just an hour ago the news was announced on Mortal Kombat’s facebook page. Mortal Kombat X will be released for mass fatalities on April 14, 2015.  This news also comes with a new character reveal which happens to be a 4 handed monstrosity known as Goro. As this new advertisement indicates,  pre-ordering the game will get you the latest revealed character.

This will be the first time Goro has entered into the realm of next-gen greatness as he was only a NPC on the previous game in the series. As one of the original cast members of Mortal Kombat it is great to see him back in action after all these years.

Over the past few months, there have been just a few reveals such Raiden and Kano with a few rumors and teasers floating around.  As stated before by creator Ed Boon, we can expect to see the biggest cast that we’ve ever seen before in Mortal Kombat so stay tuned as more reveals are sure to come.

Stay tuned for updates on participating retailers as many places have yet to update their pages.