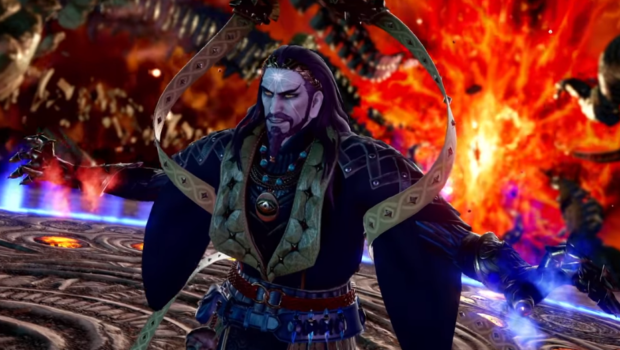 Many were wondering about the mysterious character revealed in the story trailer for the upcoming 6th entry in the Soul Calibur series and we now have somewhat of an answer as Bandai Namco releases a new trailer featuring what looks to be the final boss character Azwel:

An obvious self proclaimed “leader of humanity”, Azwel seems to have a special kind of sorcery that allows him to conjure and wield several weapons at any given time. As a result, it would seem that Azwel’s attacks can hit from several ranges though his movement seems to remain pretty static making us curious about what kind of strategy one will have to take to make a character with his unique abilities work.

As you might have noticed toward the end of the trailer, Azwel seems to go through a transformation changing his overall appearance and attacks. We certainly look forward to seeing this character in action and the obvious major role he will play in the games new story line.

Soul Calibur 6 comes to the PlayStation 4, Xbox One, and PC via Steam on October 19!!