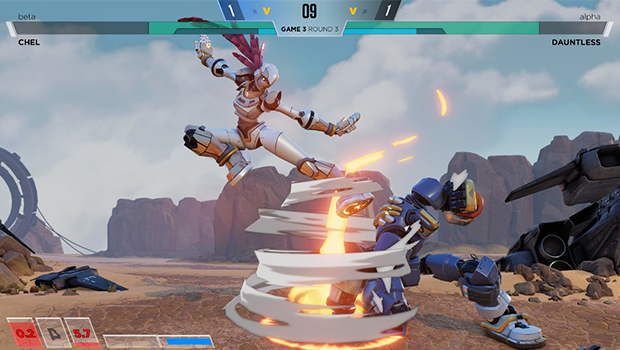 The trailer reveals what looks to be robotic characters battling it out in traditional fighting game fashion!

As information comes pouring in from the different media outlets, we’ve learned a little more about the new IP and what to expect from the Alpha that is just only a week away from being released!

Seth Killian, former Capcom community manager and combat adviser for Street Fighter IV, is bringing this new fighting game title to the PC with ideas that may ultimately change the way we look at fighting games in the future.

One of the key-features of this new offering will be the disappearance of complex inputs lowering the execution barrier to its’ most minimalist form. This is done in part to focus on what Seth believes to be the real meat of fighting games.

Rising Thunder is also being released on the Free-to-Play model an intentional choice as Seth wants to give this fighting game the same access as many MOBA titles enjoy.

Like popular MOBA’s, one of Rising Thunder’s main objectives is giving players a good online experience and with Tony Cannon’s popular GGPO netcode(now coined as GGPO3 for this new title) being built with this game from the ground up, no punches are being pulled in the most no pun intended way one could possibly fathom.

The Alpha will be available on July 28th. If you would like to sign-up for a chance to play test the Rising Thunder Alpha, head over to the website.