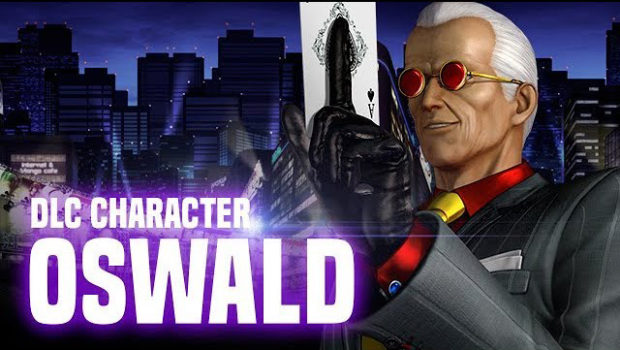 Oswald Returns As DLC For King Of Fighters XIV!! *Update*

Additional information has apparently been made available through Playstation Europe’s YouTube. Under the YouTube video description box of the new Oswald reveal it appears Oswald will be the 1st of 4 new DLC characters that will release in April. A new character was already confirmed back in November though we have it on good authority this may not pertain to the upcoming DLC for April as she may still be in development. Special shout out to KOF World for this latest information!!

Playstation recently revealed the return of a one of the most requested King Of Fighters characters for XIV in a new trailer:

Oswald, the card shark killer will be making his grand return to the King Of Fighters XIV roster as new DLC!! Originally introduced in The King Of Fighters XI, Oswald was a team member favorite as his quick and charismatic card attacks made him a standout among the rest of the cast.

Just recently, information was revealed on an update for the King Of Fighters XIV that revealed an original DLC character and new balance changes. We suspect more announcements may be on their way following this latest reveal as SNK celebrates its 40th anniversary so be sure to stay tuned as more information releases.