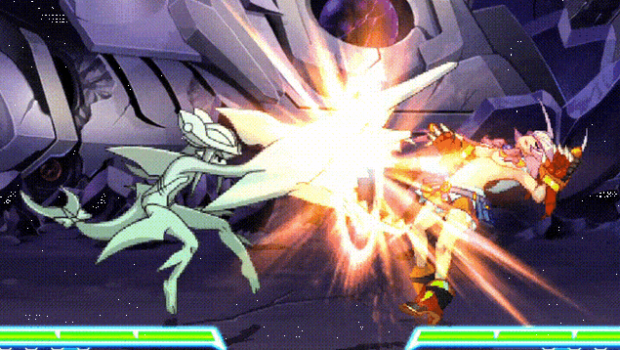 Examu recently posted an update on Kickstarter revealing their progress on the character DLC and plans for new changes for Arcana Heart 3: Love Max Six Stars!!!!!! on Steam!!!!!! The latest update gives us an in-game glimpse of Shark Girl, now officially named Pistrix. The gif below shows her ABC attack combination.

Bear in mind that this is still a work in progress with developers noting that her sprites have not been colored in as yet. While this is certainly the biggest development in the Kickstarted project, it would seem that the new characters will not be the only thing to look forward to. Take a look at the photo below: Doesn’t something seem a bit…different. If the answer is yes, then you are correct!! Examu is planning to change the aspect ratio to 16:9, a size that is common with most high definition displays. Examu will be adding the new aspect ratio to an upcoming Beta and based on the feedback they receive, this could potentially be available in the official version.