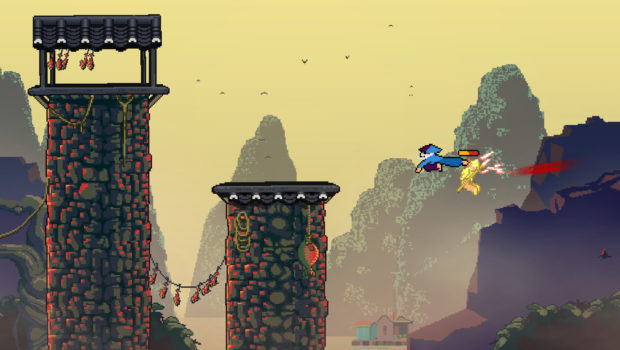 We are a bit late to the party on this one but wanted to highlight this retro-style platform fighter that has been on our radar for a while and is now available through Steam’s early access program:

Roof Rage certainly stands out among the new platform fighter offerings on the PC featuring 8-bit style visuals with a nostalgic chiptune soundtrack to boot. What really peaks our interest in this title, in particular, are the characters themselves which all take on a martial artist archetype of some sort as you battle atop beautifully pixelated landscapes. With some interesting gameplay elements, which include exchangeable projectiles and interactive environments that add extra damage, Roof Rage is definitely a game that you might want to consider spending some time with.

The Early Access, retailing at $11.99, will net you 8 playable characters, a local versus mode that includes team match/free for all options, and an online mode that offers 1 vs 1 ranked matchmaking mode with a steam player invitation option as well.

Additional information can be found on the official Roof Rage steam page. We certainly look forward to officially putting this title on our page and wish developer Early Melon the best of luck as they continue to move forward on the progress of this title.