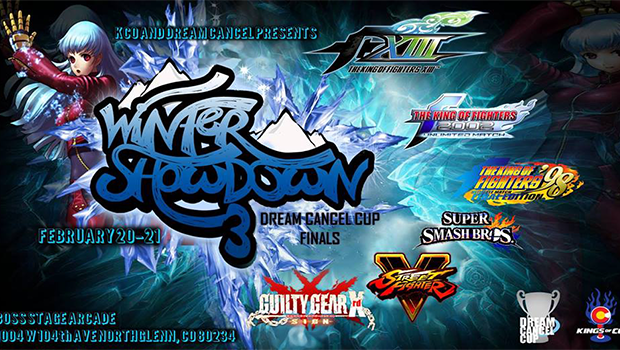 Update 2/21/2016 8:14pm- The finals day for  Winter Showdown 3: Dream Cancel Cup Finals are just about to get started!! You can see it in its entirety on the stream below and we hope you enjoy an exciting day of KOF!!

The first Dream Cancel Cup event at Winter Showdown 3 is just about to get underway!!

Winter Showdown 3 will be host to a full weekend of intense King Of Fighters competition as it will feature the Dream Cancel Cup finals! Players competing in this tournament will be seeded based on the ranking points they received from participating DCP events throughout last year.

The main games for this tournament are as follows:

If you happen to be in the Northglenn, Colorado area, do not miss out an this event. A bring your own console area will be available featuring other great fighting game titles in addition to the main games as well.

For those who cannot be in attendance, tournament organizer, Kings Of Co will be providing a live Stream on their twitch.tv channel throughout the weekend!!