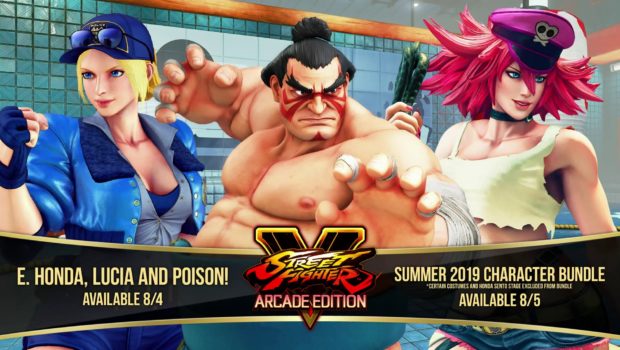 In an obvious effort of damage control for the leaked video that apparently appeared on the official steam page for Street Fighter V, Capcom has released the official trailer which we have replaced below.

It was no secret that Capcom had something to reveal at EVO 2019 for Street Fighter V as they hinted at a reveal in August months before the major event. Unfortunately, the secrecy did not pay off as a trailer for Street Fighter V was leaked just a few minutes ago online revealing a definite whopper for upcoming DLC content:

As the trailer reveals, E. Honda has returned culminating in the reunification of the original 8 characters from Street Fighter II. E. Honda looks to have a v-trigger that will either enhance his hundred-hand slaps, or his head-butting special move something that will require some hands on time to uncover.

Of course, the surprises were not over as Lucia makes her introduction into the Street Fighter universe for the first time as a playable character! Lucia, originally introduced in the 16bit beat’em up Final Fight 3, is definitely a rush down archetype who will give you the option of a weapon based v-trigger similar to Cody, or a fire enhancement that certainly gives off some Ken Masters vibes.

Lastly, there is the deadly vixen Poison making her return to the roster with what seems to be some all new movesets in tow. Her initial v-trigger is definitely hard to discern at the moment though the second v-trigger is certainly a familiar face from the original Final Fight game giving her access to dynamite that reminds us a bit of Ibuki’s v-trigger allowing her to setup her opponent for additional damage through juggle properties.

An August 4th release date is confirmed for the three new characters but a bundle is going to be available on August 5th. There is also a free trial happening at the moment until the 11th but we are unsure if the characters will be available in addition to the season 3 characters that this latest trial includes.

We don’t know how long the video will be up as Capcom may not be to pleased with this unfortunate leak so we suggest taking a gander A.S.A.P…or you can of course wait until EVO where it will most likely believed either before or after top 8 on Sunday(more about this later). Though the cat may be out of the bag, we are not yet certain that this is the only thing Capcom has to reveal  as Capcom Pro Tour sponsor Sony also has announcement to make at the event so stay tuned for more info.