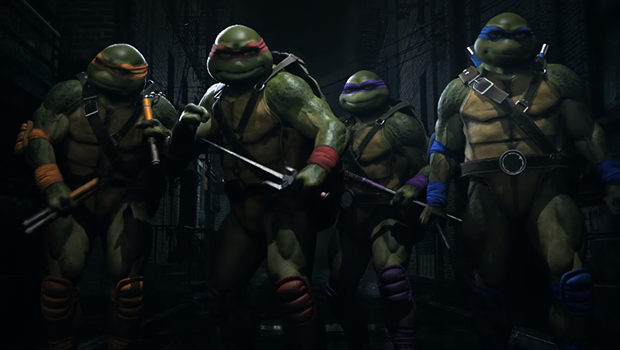 At the end of the ELEAGUE Injustice 2 tournament, Nether Realms Studio revealed a new trailer for the anticipated Fighter Pack 3 and boy did it surprise:

Atom,who was revealed at the Injustice 2 Pro Series finale, is now officially confirmed as a Fighter Pack 3 character and will be available for early access owners on Dec. 12th. Atom will be joined by Enchantress, a character who was featured in last years Suicide Squad movie, and the most shocking of all the Teenage Mutant Ninja Turtles!!

Many may be scratching their heads about the inclusion of the heroes in a half shell but Ralph’s trench coat introduction, which many thought may have been Rorschach, was a nod to the 1990 live action film that was distributed on Blu-Ray in 2012 by none other than Warner Bros. Based on how the trailer presented the turtles, we can assume that they will in fact act as one playable character. How this will work has us both curious and excited about their presence in the Injustice 2 universe.

In addition the new Fighter Pack introduction, a release date has been revealed for the PC version of Injustice 2.  Starting tomorrow on November 14th, Injustice 2 will be available on steam for digital download though prices and what may come with this latest version have yet to be revealed outside of an Ultimate Edition option.

We are glad to see the continued content coming from Nether Realms latest IP and we are certainly curious as to what they may have next going into 2018.